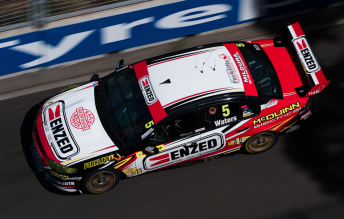 Cameron Waters has won the 2015 Dunlop Series title after finishing second to Paul Dumbrell in the final race of the season.

Dumbrell led all but a portion of the opening lap at Sydney Olympic Park, but was always set to hand over the #1 plate to Waters as the Prodrive Racing Australia driver tailed him all the way.

“It’s awesome. Thanks to all the boys at Prodrive and my mum and dad I couldn’t have done it without them,” said Waters.

“It’s great for Prodrive to win the main championship and the Dunlop Series.

“It has been an awesome year.”

It was actually Waters who got the jump as the lights went out, Dumbrell slotted into second as pole-sitter Jack Le Brocq started slowly and dropped to fourth, behind Andrew Jones.

Josh Kean and Matt Chahda combined to bring about the Safety Car on Lap 3 when the latter collided with the former at Turn 2.

Kean pitted with rear-end damage having backed into the wall while Chahda parked on the circuit.

The race restarted on Lap 7, when Le Brocq slipped by Jones at Turn 1 but rubbed the wall on exit and had to defend on the run to the chicane.

A lap later, Todd Hazelwood attempted to pass Garry Jacobson into the train station complex but was tagged on the way through and slid into the wall. He took another hit from Jacobson as Jonathon Webb inherited fifth.

While Dumbrell opened up a 1.6s lead, the top five compressed in the latter stages.

Webb set the fastest lap on Lap 11 but could not find a way past Jones, despite a minor coming-together on the final lap.

Dumbrell ultimately crossed the finish line 0.6s clear in the time-certain 16-lapper (down from a scheduled 17), but second was enough for Waters to give Prodrive both V8 Supercars Drivers’ Championships in 2015.

Le Brocq’s third place helped him to third in the series, while Hazelwood recovered to sixth after both Aaren Russell and Shae Davies cut the Turn 2/3/4 complex on Lap 11.

Russell, Macauley Jones, James Golding, and Bryce Fullwood made up the rest of the top ten, while Jacobson could manage only 15th spot after going into the wall on Lap 10.