Van Gisbergen: Courtney turned himself around Van Gisbergen lunges down the inside into Turn 9. pic: V8TV

Shane van Gisbergen insists that James Courtney only had himself to blame for being knocked out of the lead of the V8 Supercars season finale in Sydney.

Courtney was tagged into a spin by Van Gisbergen at Turn 9 on lap 4, damaging the right-rear of the Holden Racing Team Commodore.

Courtney dropped to fifth as smoke poured from his right-rear tyre, necessitating an early first pitstop.

With the panel still not fully cleared from the tyre, a delamination required an extra stop some 25 laps later, putting Courtney well and truly out of contention.

“I went down the inside, was good, and then he just moved across on me,” said eventual race winner Van Gisbergen of the clash, which was deemed a racing incident by officials.

“That’s one of the rules, you’re not allowed to move under brakes, and it was still fine at that point. The Holdens make contact at the apex. pic: V8TV

“I was still coming in there and I’m pretty sure I was up to the B-pillar by the time of the turn-in, but he just turned across like I wasn’t there.

“I wasn’t far enough (down the inside) to pass him, he could have just stayed around the outside and kept his position but he just came across and spun himself out.”

Finishing down in 12th, Courtney said that the drama was a somewhat fitting end to a trying season, which saw the former champion miss three events with injury.

“I thought I gave him room, I gave him a car width on the inside,” Courtney told Speedcafe.com.

“I heard him coming, he was coming in pretty hot, but I ended up in the fence with a heap of damage and the day was over.

“I’m sure he didn’t mean to take me out or anything, but I was just dealt a shit sandwich.

“It’s a summary of our year in one race really. Speed and then things going wrong.” 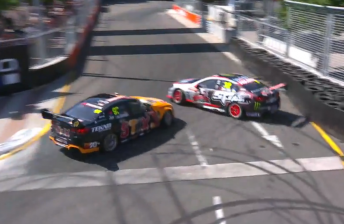 Although disappointed, Courtney said he had no reason to seek out Van Gisbergen in the paddock post-race.

“Webby (Tekno team owner Jonathon Webb, a close friend of Courtney) wrote me a message saying sorry, but we’re all here racing as hard as we can,” he said.

“We’re paid to be on the edge and from time to time shit goes wrong.

“It’s just unfortunate that it happened while I was leading. If we were 18th or 19th I wouldn’t have given a crap.

“The good thing is we had consistent speed throughout the weekend and I think we’ve got a good grasp of what we need from the car.

“We’d been quick in some sessions before this weekend and not really known why and here we’ve gone a long way to understanding it.

“It was great to get a pole position but after two fourths yesterday it would have been great to be on the podium somewhere.”

Next Story V8 stewards hand down penalties and exclusion