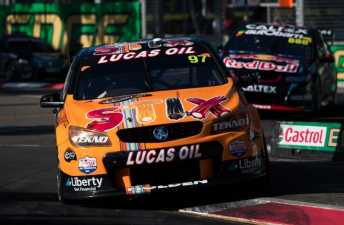 Van Gisbergen signed off at Tekno with victory

Shane van Gisbergen sent a message to future team-mate Jamie Whincup with a commanding drive to victory in the season finale at Sydney Olympic Park.

On his last drive for Tekno Autosports, Van Gisbergen survived a Safety Car restart with four laps to go to beat Whincup to the chequered flag by just 0.4s.

The final sprint came at the end of a gruelling 250km contest in hot conditions to bring the curtain down on the V8 Supercars season.

James Courtney made the most of pole position to lead the early stages, but immediately found himself under attack from the aggressive Van Gisbergen.

A dive from the Kiwi at Turn 9 on lap four tipped the HRT Commodore into a half-spin, sustaining right-rear panel damage against the tyre wall.

A small mistake from Winterbottom at the Turn 2 chicane then let Whincup through to second, just as the Safety Car was called for a crash from Tim Slade.

The Supercheap Holden made heavy head-on contact with the concrete at the penultimate corner on lap 11 after suffering a stuck throttle.

That triggered the first round of stops for the majority of the front-runners and set up a tense battle between Van Gisbergen and Whincup for the following 20 laps.

Whincup proved the first to blink, dropping 10 seconds behind when he ran down the escape road at Turn 8 as the second stops approached.

The deficit was six seconds after the final stops and remained stagnant until Steve Owen’s Falcon stopped on track with broken right-front suspension, triggering the final yellow.

The former champion breifly split the two Holdens following Whincup’s mistake, but fell back to third in the second stops.

McLaughlin appeared set for fourth until pitting the #33 Volvo with steering problems with just over 20 of the 74 laps remaining.

That moved new champion Winterbottom and stablemate David Reynolds up to fourth and fifth respectively.

With Courtney 12th after being forced into a three-stop strategy due to his damage, Lee Holdsworth proved the top Walkinshaw runner in seventh.

Michael Caruso, Scott Pye and Fabian Coulthard completed the top 10, with the Kiwi ending his stint at Brad Jones Racing on a quiet note.

Team-mate Jason Bright vaulted into the top five thanks to an early first stop and the subsequent timing of the Safety Car, but eventually finished 21st after a wheel failure.

Chris Pither joined Owen and Slade on the retirements list after a late clash with David Wall, who was just 17th after running among the top 10 for much of the race.