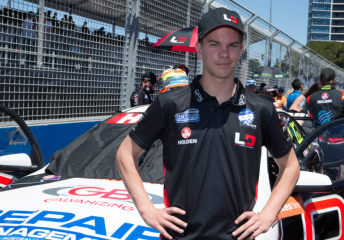 Teenager Alex Rullo will step up to the Dunlop Series next season with V8 Supercars squad Lucas Dumbrell Motorsport.

The 15-year-old will graduate from the Kumho V8 Touring Cars to pilot the Holden Commodore currently used by Tim Blanchard.

Rullo has earmarked himself as a star of the future when he became the youngest driver to win a CAMS circuit race, taking victory in the Kumho Series at Winton this year.

The Western Australian finished as the runner-up in the Kumho V8s to Liam McAdam, who will contest the 2016 Dunlop Series with Eggleston Motorsport.

“I’m so excited to be working with Lucas Dumbrell and his team and make the step up to the Dunlop Series,”said Rullo.

“It’ll be great to have the support of a main game V8 Supercar team and the experience of Nick Percat behind me.

“I know it’s going to be a big learning experience but I’m really looking forward to it.”

LDM boss Lucas Dumbrell says Rullo has shown all the qualities of a future star driver and is keen to help develop his talent at the team next year.

“Alex is an impressive, talented young driver with an incredible future ahead, and I believe we have signed a future star of the sport,” said Dumbrell.

“The next few years are vital in his development and Nick is looking forward to taking Alex under his wing as Garth (Tander) did with him.

“It is important V8 teams look towards the future and I’m pleased we can give Alex the opportunity to take the next step in his career while LDM also expands into the Dunlop Series.”