Ryan Hansford has taken out the final East Coast Bullbars Australian V8 Utes race and round of the season at Sydney Olympic Park.

Nathan Pretty led the field away from the inside of the front row but there was drama further back as Tyler Greenbury failed to get away and was clouted by Adam Beechey.

With barely two corners completed, the safety car was called, before racing resumed on Lap 4.

Ryan Hansford continued to stick to the tailgate of Pretty, before getting a run on car #56 and taking over the lead at Turn 2 on Lap 6.

Pretty crossed the line second but was demoted for fifth due to a time penalty for a false start, leaving Craig Dontas race and round runner-up.

Gerard McLeod kept out Ryal Harris for sixth, despite Harris’ aggression after sealing the title the day prior. 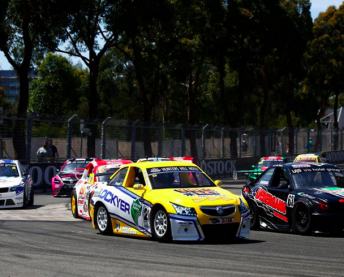 Craig Woods scored his second race win of the season in Race 4, a day after his first, while Pingel was lucky to avoid a major accident on the final lap.

Second-placed Blake Sciberras got sideways at the train station complex and bounced off the tyre barriers into the path of Trent Young, who rolled in the big impact.

Series contender Adam Uebergang took damage on the way through but managed to finish fifth, two positions ahead of Pingel, who did enough to take the title.

“Like every last race of the year, everyone goes mental,” said Pingel.

“The main goal of this weekend was to finish every race and there were a few that nearly made that not happen, but I’m just happy to come out alive!”

The race had already been shortened due to an earlier safety car when Adrian Flack and Ben Walsh both crunched the wall.

Earlier, Adam Casuccio was a maiden race winner in a similarly crash-marred Race 3, the biggest of which being Kent Quinn’s high-speed shunt at the Turn 5 sweeper. Matt Mingay denied Sheldon Creed a clean sweep in a race shortened due to a crash for Bill Hynes.

Hynes got his United Fiber machine into a position even a Stadium Super Truck could not recover from when he rolled after getting sideways at the Turn 6/7 complex.

The red flag denied a typically charging Creed to go three from three, but he did win the round from Paul Morris and Mingay.

Matt Brabham finished the race third after leading prior to the competition caution on Lap 4. Thomas Randle swept the final round of the CAMS Jayco Australian Formula 4 Championship.

Randle cut through the field in Race 2 from sixth on the grid after the inversion, even passing Harry Hayek around the outside at the chicane.

Randle started Race 3 well from the inside of the front row but was outbraked by Lloyd at the first corner.

He had the lead back just after an early safety car for Rowe – and just prior to the yellows being called for again when Hayek spun Luis Leeds into the wall – and never looked back.

Lloyd finished second and Will Brown third, race results also reflecting the round.