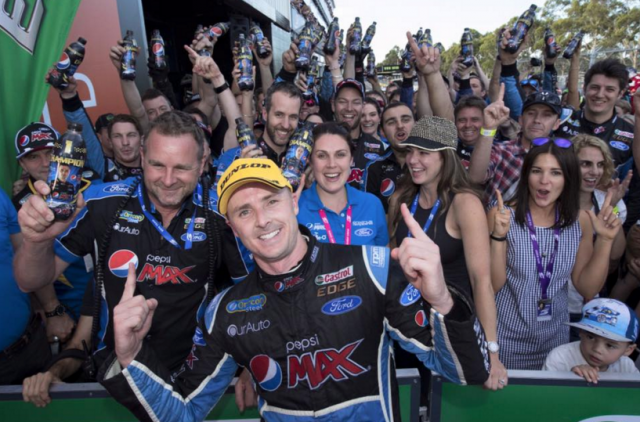 Winterbottom and Edwards celebrate with the Prodrive team

The journey to the summit of V8 Supercars racing for PRA is now complete after Mark Winterbottom sealed the title with a race to spare.

It goes with the Supercheap Auto Bathurst 1000 successes PRA enjoyed in 2013 and 2014 before finishing a close second this year.

While the last team to beat Triple Eight in the drivers’ championship, Dick Johnson Racing, fell backwards after its 2010 triumph, Prodrive appears better placed to continue its form.

The team is expected to launch its 2016 campaign as early as the coming week, with a new primary sponsor to be rolled out for Winterbottom’s #1 Falcon.

“The best way I can sum it up is potentially,” Edwards told Speedcafe.com when asked if it is the start of a Triple Eight-style era of domination.

“I know that when we won Bathurst in 2013 for the decade prior to that you really didn’t sleep much the night before.

“When we went back in 2014 everyone was so much calmer, more relaxed because we ticked that off.

“I think it is the same thing with the championship. We know we’ve got great cars, good drivers. It’s a great team.

“So yes (we can dominate) but obviously you’ve got to tick the boxes in all areas.”

Ahead of the 200km Race 36 dead rubber which will finish the 2015 season, Edwards says that Winterbottom will be given permission to attack without any inhibitions.

“We all know that Mark couldn’t drive at 100 percent. He had to drive a little bit within himself,” Edwards said of Winterbottom’s need for self-preservation to seal the title.

“So he can have a bit of fun in the final race of the year.”

When asked for his thoughts on future success yesterday evening, Winterbottom said he must first let the maiden title sink in before looking ahead.

“It feels like we’ve finished something we started many, many years ago,” he said.

“But like Jamie (Whincup), I’m sure when he won one he was rapt and then went ‘I want two and three’ and you just keep trying for more.

“We’ll celebrate this one first, let it sink in and then just see how it feels. At the moment it’s still a bit surreal because we’ve got to turn up again (today).

“I’m celebrating inside, but I’m holding it all in. You want to cry and laugh and everything, there’s so many emotions, it’s massive.”