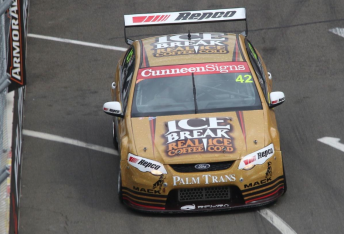 Jack Le Brocq secured a maiden Dunlop Series pole for the final race of the year while title contenders Cameron Waters and Paul Dumbrell will start from second and third on the grid.

Waters led through the first runs of the 20 minute session before Andrew Jones became the first man into the 1:29s just beyond the halfway point.

Jonathon Webb took his Image Racing Falcon to the top with five minutes remaining before Dumbrell missed his chance with a poor exit off Turn 10 having gone fastest to the second sector.

Waters went fastest on each of the first two laps of his second run as Dumbrell moved into second with three minutes left.

Le Brocq, however, managed to do what he’d threatened three laps earlier when he jumped to the top of the timesheets with a 1:29.2640s on his eighth lap.

With Jones already back in the pits and Waters conceding defeat before the chequered flag, the focus shifted to Dumbrell, who lowered his personal best in the final minute but couldn’t move up the order.

That left Le Brocq, promoted to MW Motorsports’ Ice Break Falcon in place of Chris Pither, to take the Armor All Pole Position for the first time.

Waters leads the series by 89 points with 150 on offer for the winner of this afternoon’s 17 lap race scheduled to begin from 14:20 (local time).