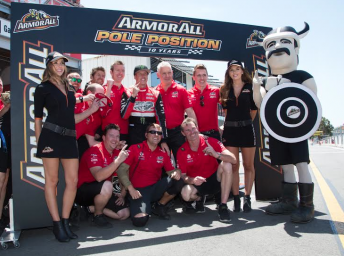 James Courtney will start the final race of the V8 Supercars season from pole after defeating Shane van Gisbergen in a tight Top 10 Shootout.

The Holden Racing Team Commodore was the fifth car on track, recording to 1:28.07s to leap 0.4s clear of previous fast-man David Reynolds.

“I’m a Western Sydney boy and I have good memories here so it is awesome to finish the year with a pole,” said Courtney.

“It was more nerve wracking standing in the pit lane watching than being in the thing.”

Last man out Van Gisbergen came closest, missing the Armor All Pole Award by just 0.019s to share the front-row with his Holden rival.

Whincup and Winterbottom make up the second row ahead of Kelly, Reynolds, McLaughlin, Tim Slade, Michael Caruso and David Wall.

The session marked Wall’s first ever Shootout appearance and comes in his last start before stepping back to co-driver duties next season.

He is set to start 12th in today’s race after a two-place grid penalty for impeding Rick Kelly during the earlier qualifying session.