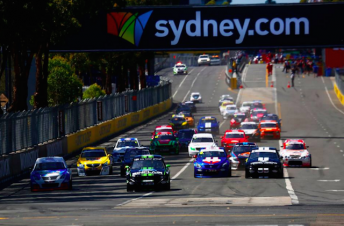 Trent Young and Craig Woods have won the first and second races, respectively, in the Aussie Racing Cars’ final round at Sydney Olympic Park.

Meanwhile, the series has narrowed to a race between Brendon Pingel and Adam Uebergang as Chris Stevenson crashed out of Race 1.

Peter Carr was the first of those and looked set to run away with proceedings before being reeled in by Young, Uebergang, and Blake Sciberras.

Young took the lead on Lap 3, then Sciberras led briefly before running wide at the train station complex and dropping to third on Lap 5.

Woods, who had by this time made first position a five-way battle, did much the same two laps later, leaving Young to gap the field as the rest squabbled over the minor placings.

Woods recovered to second, ahead of Carr, Sciberras, and Uebergang, while series leader Pingel finished eighth and Stevenson retired having struck the wall on Lap 4.

Race 2 was a slightly more straightforward affair, with Woods leading all the way for his first race win of the season, on Western Sydney Motorsport’s home turf.

Young started poorly and was swamped at the first corner, just staving off Uerbergang to emerge fourth.

A pile-up which ensued when Tony Quinn clashed with Brendon Tucker, also catching Darren Chamberlin and Ian Chivas, brought the safety car out at the end of Lap 1.

Young dived back into second position upon the restart, and the Top 2 quickly put over a second on the rest of the field.

Sciberras led the charge to bridge the gap to Woods and Young, but was passed by Carr and Uebergang on the final lap as Woods ran out to a 1.2s victory over Young.

Pingel held out Adrian Flack to finish sixth and maintain a reasonably comfortable margin as the series concludes with a further two nine-lap races from 9:20 and 12:55 local time tomorrow.