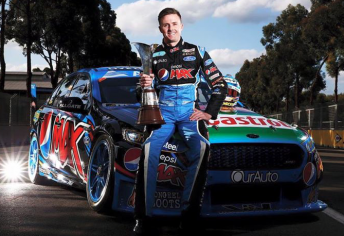 Mark Winterbottom has claimed a breakthrough V8 Supercars title with a third place finish in Race 35 at the Coates Hire Sydney 500, won by Jamie Whincup.

The Prodrive driver only needed to finish 20th or better to claim the coveted prize in Australian motorsport following his fifth pace finish in Race 34.

“I have a few tears under this visor,” said Winterbottom upon realising his achievement.

“I’m so emotional, I’m speechless it is just awesome. Thanks to all the guys at the team.

“I’ve dreamt about this for such a long time.”

Whincup produced a second commanding victory as he led home David Reynolds and Winterbottom at the flag.

The Red Bull driver dominated the race from start to finish as he quickly opened up a healthy lead over Reynolds in the opening the laps.

A Safety Car period caused by Prodrive’ Steve Owen, who came to a halt with an engine issue on lap 10, briefly threatened to change the complexion of the race.

However, such was Whincup’s advantage he managed to pit during the Safety Car and rejoin in the lead.

Reynolds suffered a brief scare when smoke began to put from his front left, but it failed to prevent him from from claiming second, ahead of Winterbottom, who produced a slick drive to finish a comfortable third.

In a race of few incidents, Nissan’s James Moffat produced the only other dramatic moment when he misjudged the chicane and ploughed into the tyre barriers, breaking his front right suspension.