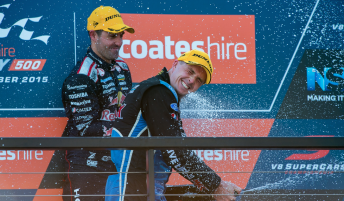 Whincup and Winterbottom on the Race 35 podium

Whincup’s run of four straight titles has been ended by Winterbottom, who has had to wait 12 long seasons for his first triumph.

The Red Bull ace endured a sluggish start to 2015 and was a long-shot for the title by mid-season.

Despite greatly improved car speed over recent months seeing Whincup win five of the last eight races, a disastrous Bathurst put paid to any realistic chance he had of a seventh title.

“The day is about Mark, I don’t want to take any shine off him,” said Whincup after taking another two wins today in Sydney, lifting his career total to 97.

“He’s had a great year, he’s been solid. Plenty of critics have said he won’t do it and he’s choking, but credit where credit is due.

Whincup was in a jocular mood in the end-of-day press conference, where he sat alongside new champion Winterbottom.

He was quick to laugh off any suggestion that this year’s loss would spark a similar response to his 2010 defeat, which was followed by four straight titles.

“We’ll fight back next year, but these guys have got to enjoy that championship trophy.

“It holds one and a half beers and once it gets cold it gets a nice cap on it.”

Whincup can still climb as high as fourth in the championship tomorrow if he significantly outscores both Garth Tander and Shane van Gisbergen.

Red Bull’s focus will, however, be on the Teams’ Championship, where it now holds a 16 point lead over the Pepsi Max Crew.

“It’s the only challenge left for this year, the teams’ championship,” he said.

“The boss (Roland Dane) is pretty passionate about it so that’s what our focus will be on tomorrow.

“These guys are wounded and hanging on, they’re doing a good job, but it’s going to be a cracker tomorrow.”

VIDEO: Whincup and Lowndes speak after racing on Saturday in Sydney