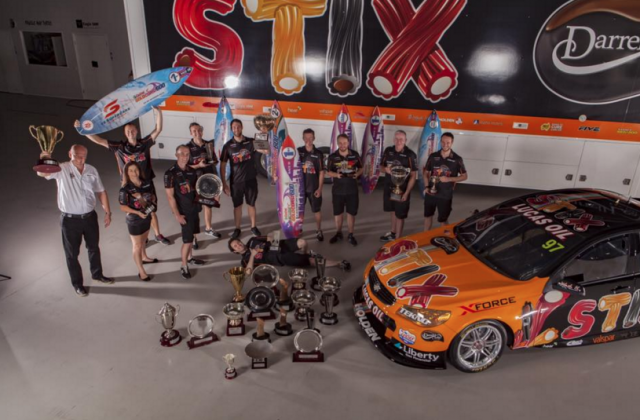 The Tekno team pose at their workshop on Monday

Sydney street circuit master Shane van Gisbergen is on a mission to add to Tekno Autosports’ trophy cabinet one last time before leaving the squad at the end of the weekend.

The 26-year-old Kiwi was in sizzling form on Friday at the punishing Olympic Park venue, recording the quickest time in all three practice sessions.

Van Gisbergen will farewell the tight-knit Tekno outfit on Sunday before linking up with V8 Supercars super team Red Bull Racing Australia for 2016.

“It kicked in on Monday really when we did a photoshoot with all the trophies and all the guys,” said Van Gisbergen of his Tekno farewell.

“It was pretty tough. We’ve achieved a lot over the last three years so it’s pretty sad to leave in some ways.

“It’d be great to go out on a high. We’ve won here in each of the last two years so to go three in a row would be awesome.”

Van Gisbergen made a controversial leap to join Tekno in late 2012, walking out of a new contract with Stone Brothers Racing as it transformed into Erebus.

Initially portrayed as a retirement from the sport before the Tekno deal was announced, the move made Van Gisbergen a polarising figure among fans and left the flying Kiwi in court for more than 18 months.

The results have spoken for themselves, however, with Van Gisbergen recording 11 wins aboard the Triple Eight customer Holden.

Two of those have come at Sydney Olympic Park, where Van Gisbergen’s flamboyant style and breathtaking commitment are rewarded on the stopwatch.

“Right from the get-go I felt comfortable in the car, it was awesome to drive, really good over the kerbs and straight away getting right into it,” he said of Friday practice.

“There are lots of scrapes down the right-side of the car. It’s pretty easy to make a mistake as we saw. Turn 8 is pretty tough.

“If you didn’t hit the kerb it’s so slippery, but then if you did hit it your car would fly so high. It was pretty hard to get right.”

Ominously for rivals, Van Gisbergen feels there’s more left in the Darrell Lea Holden ahead of this morning’s final practice.

Unlike Super Sprint events where each driver receives a set of Friday-only practice tyres, Sydney’s Super Street format left teams to pick through the best of their used rubber.

“I think we’ve got a little bit left,” he said.

“I did a pretty good lap at the end but the gap obviously closed up (compared to Practice 2) because everyone put on a better set.

“Qualifying when everyone is on the same tyre is going to be interesting to see how we go.

“But you have to qualify on the front two rows here. It’s pretty tough if you get a bit further back.”