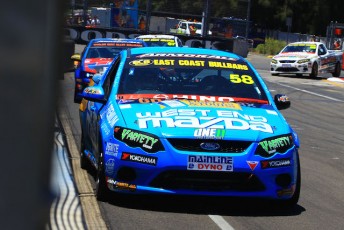 Miedecke had given himself the best possible chance of overhauling his Matt Stone Racing stablemate by winning the opener earlier in the day.

However, the Port Macquarie native fell out of the running when his iSeek Falcon ground to a halt on Lap 3 with a throttle issue.

Nathan Pretty got the jump from the outside of the front row after the Top 9 grid inversion and led all the way.

Craig Dontas shadowed car #56 for the duration but a five second time penalty for a jumpstart saw him place behind ultimate runner-up Gerard McLeod.

McLeod had to withstand late pressure from Kris Walton, who cut through from sixth to fourth by the chequered flag.

Harris cruised to tenth, enough to put the title beyond anyone else.

“I haven’t slept too well the past two nights but I’ll have a proper celebration tomorrow as it hasn’t really kicked in yet.”

Earlier, Miedecke had seen off Ryan Hansford to win Race 1 and Harris similarly held out Walton for third. 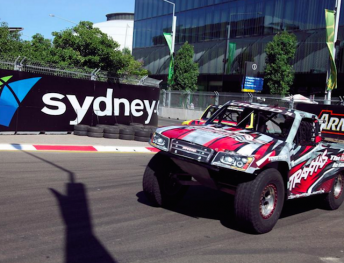 Sheldon Creed won his second Stadium Super Trucks race in as many days.

Matt Mingay was the runaway leader until the Lap 4 competition caution, after which Creed quickly took over first place and ran away with the race.

Paul Morris was soon also past Mingay, and Robby Gordon looked set to do the same until the rear axle in the #7 truck could stand no further punishment and sheared away from the diff housing.

Gordon came to rest propped up on a tyre wall as Creed went on to win from Morris and Mingay, while Matt Brabham was another non-finisher after heavy contact with the wall at the Turn 5 sweeper. Randle led every lap amid two safety car periods, the latter of which closed the race after a big incident involving Zane Goddard, Tom Grech, and Luis Leeds.

Goddard was fastest away from outside the front row but Randle reclaimed the lead at the first corner, before the safety car was called when Nick Filipetto found the wall.

Racing resumed on Lap 6, but only for two laps as Goddard hit the wall at Turn 8 and was cleaned up by Leeds and Grech.

That incident elevate Will Brown to second and Nick Rowe third, while inaugural champion Jordan Lloyd was fifth.