QUESTION: Mark, it’s been a long journey. You’ve claimed Bathurst, you’ve claimed the Dunlop Series… where does this sit amongst your amazing achievements?

WINTERBOTTOM: I’m speechless to be honest, it hasn’t really sunk in.

Everything that you’ve ever raced to get here has been an achievement whether it was karting to get into the category, the DVS, Bathurst as well and then to win this.

I’ve been trying for so many years and stayed at the one team for such a long time as well.

Just to do it and see the crew’s reaction when you come in and stuff, it’s years of work to do it.

It makes you respect people like Jamie (Whincup) more to win six. The week and the drama and all that sort of stuff is crazy.

To win one is fantastic. I’m over the moon. It’s a piece of history. When people wear those t-shirts that say 2015 champion, it can never be taken off.

QUESTION: The in-lap after the chequered flag, you finally popped the visor up to give us proof that there were a couple of tears in there. Were you expecting that outpouring of emotion?

WINTERBOTTOM: I don’t know. It’s just a release I guess, you’re just tensed and you’ve taken the chequered flag and the crew is over the wall cheering you on.

It’s an emotional thing. We go through our life and everything is all about this. To get the ultimate reward, it pours out. It’s awesome.

It’s going to be cool to celebrate it with the family and a lot of friends who have supported me along the way here as well.

Unfortunately they make you turn up tomorrow and race because I could hit the town tonight. Maybe I will (laughs).

It’ll be just cool to do tomorrow and go away and really celebrate it. Everyone who has been involved knows who I am and what it means to me. It’s a special moment. 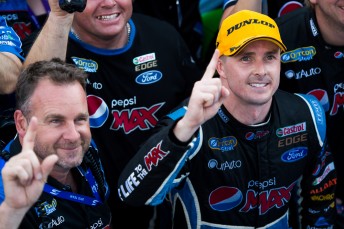 QUESTION: The championship lead was so big after Sandown and slowly it got whittled away. Did any doubt sneak in or were you confident the whole time?

WINTERBOTTOM: I felt pretty comfortable. We were doing what we could do and when the car was good I attacked and when it wasn’t I conserved.

People comment that you’re choking and whatever, but at the end of the day we’ll put #1 on the door next year and that was the ultimate goal.

Triple Eight definitely stepped up, Volvo as well and a couple of other teams. But saying that we’ve had two pole positions in the last two rounds and I’ve only had three all year.

We’ve still got speed, just in race pace we need to tidy it up. I felt like I had control, but in Sydney, hitting the fence or whatever it’s all over. You’re never too confident but we were quietly confident.

QUESTION: Now that you’ve wrapped it up, do you feel freer to have a real go tomorrow, or will you just be happy to be out there and finish the season?

WINTERBOTTOM: I’m just going to put a really stiff rear spring in it and do burnouts for 77 laps (laughs).

Tomorrow we’ll go and try to win the race. All the guys are celebrating, but they’re not on their way home, they’re working on the car to make it quicker for tomorrow.

If we’re good enough to win the race we’ll have a crack and if not… we’re not going to just tool around, there’s no point in doing that.

There were points today where I brought the brake-marker back a couple of metres because I didn’t want to lock a tyre and end up in the fence.

You are a little bit more conservative but at the same time (tomorrow) if I drive straight into the fence the guys aren’t going to be that happy. It’s a fine line. 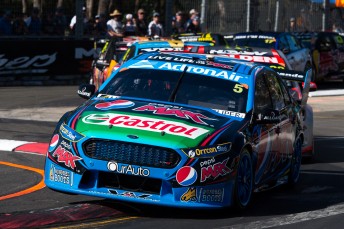 Winterbottom secured the title with third in Race 35

QUESTION: Do you feel like this is the monkey off the back for you now? Will it sort of open up the future for you?

WINTERBOTTOM: It’s massive to win this thing. I’ve been really proud of the career I’ve had and we’ve come so close in the past, whether it’s been second or third or whatever.

All the achievements we’ve had along the way don’t feel like they’ve got the credit until you can actually put a whole season together.

It sort of pieces together all the years of hard work and results to establish something like we have.

Bathurst was the first part of it and now to have a full 12 months… it just feels like we’ve finished something we started many, many years ago.

But like Jamie, I’m sure when he won one he was rapt and then went ‘I want two and three’ and you just keep trying for more.

We’ll celebrate this one first, let it sink in and then just see how it feels. At the moment it’s still a bit surreal because we’ve got to turn up again tomorrow.

I’m celebrating inside, but I’m holding it all in. You want to cry and laugh and everything, there’s so many emotions, it’s massive.

QUESTION: Was it made more difficult after Chaz (Mostert)’s accident at Bathurst? Have you had to look more at Dave (Reynolds) and elsewhere to find answers?

WINTERBOTTOM: Dave drives a little differently and with Chaz it’s quite similar.

It’s just hard because you’ve got a team-mate in the garage next to you that is learning tracks effectively copying our set-up instead of Chaz having his ideas and we’re working as two cars.

We sort of lost that a little bit, but again we had two pole positions in the last two rounds. It’s achievable, but you do miss having an extra person to feed off.

If Cam (Waters) or Steve (Owen) could do six months you’d be able to work together but they’re coming into the Gold Coast or Sydney and it’s a horrible place to debut again. You do lose a little bit from that. 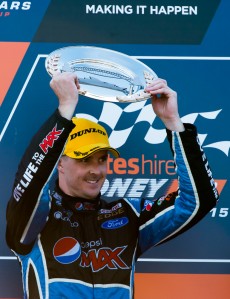 Winterbottom with his third place trophy

QUESTION: What has been the difference though this year that’s enabled you to go that extra step?

WINTERBOTTOM: It’s everything I think. Our bad days have been more consistent.

We’ve had a lot of (Prodrive) cars up there taking points off everyone else as well.

There’s times when we’ve been four of the top seven or whatever. If Jamie or Craig (Lowndes) is finishing eighth we’re taking a lot of points off them.

The engineering department had a bit of a reshuffle. We lost one (Grant McPherson) but promoted another. It’s just little things.

Everyone has worked really well together and we’ve had more direction on the car as well.

It’s all added up, but the biggest thing has been about us as a team being able to take points of everyone else. In the past we haven’t been able to do that.