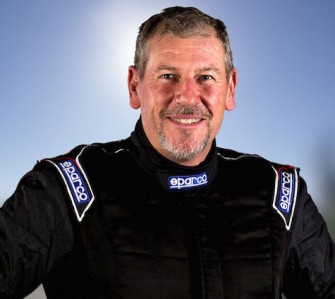 An era will come to an end this weekend when Dunlop Series stalwart Aaron McGill makes his final start in the category.

The Sydneysider holds the record for round starts in V8 Supercars’ second tier but there will be no advance on 76 race meetings when he hangs up the helmet at his home event at Olympic Park.

One of the last true privateers in V8 Supercars, McGill believes the Dunlop Series has outgrown his small team.

He intends to move to the Touring Car Masters in 2016.

“It just got difficult to find the money needed to do it properly,” the 52 year old explained.

“I still enjoy driving the cars but it’s just so bloody difficult, and they’re so fast now.

“It used to be for privateers, true privateers like the Mal Roses of the world.

“Now you’ve got Brad Jones (Racing), and basically Eggo’s (Eggleston Motorsport) is a Triple Eight satellite team, and we just operate out of a garage at home with a couple of mates at night spannering the car up.

McGill debuted in the Development Series in 2001, before commencing a near unbroken run of starts first with Jay Verdnik’s Jay Motorsport in 2004 and then his own McGill Motorsport operation.

The latter has been a single car outfit for much of its existence, except for a multi-car HPM Racing-branded effort which also fielded Luke Youlden in 2007.

“I wobbled into the championship about Round 3, 2004, and since then I’ve missed six rounds due to the GFC,” the presently Battery World-backed driver recalls.

“As a privateer it’s been a bit of a long haul.

“I gave up work and I just survived off the car as a professional Supercar driver, but I didn’t have a yacht in the harbour or anything,” mused McGill, who now combines trucking with motorsport.

The once DVS podium finisher, who also has a single Bathurst 1000 start to his name with Paul Morris Motorsport in 2000, nominates a wet race at Homebush in 2011 and the competition generally as highlights of his decade-plus spell in the Development Series.

“We didn’t have any wets and I went out on slicks. It dried up and we went from stone motherless to seventh.

“But in a general term it’s just being able to meet guys and see them come through, like Holdsworth, McLaughlin, even Dumbrell when I first started in ’01.

“To race with guys that have gone onto bigger things – not that I taught them anything but just to be rubbing doorhandles with them – has been a highlight.”

McGill’s efforts will now transfer to the Touring Car Masters, in which he is set to compete in the currently Doug Westwood-owned 1971 Ford Falcon XY GT-HO.

The car has been repaired since a major crash at Bathurst in 2013 in the hands of Glenn Seton, who was turned into the wall on Conrod Straight by Andrew Miedecke.

McGill will undertake further work on the car before joining the series mid-season.

Next Story Dumbrell on DVS pole as Waters comes to grief