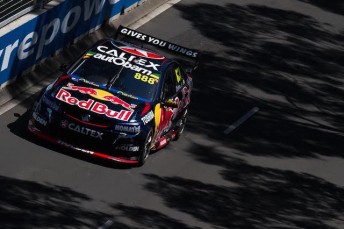 Craig Lowndes will have to come from the rear of the field in Race 34 to keep the Championship alive. pic: Daniel Kalisz

Lowndes, who will start the encounter from the rear of the grid, found the tyre wall at Turn 11 late in the session as he attempted to lift himself from 25th.

McPherson was left to lament the Red Bull Racing Australia car’s lack of pace, believing that Lowndes would not have made any improvement even if he had completed the lap.

“It was unfortunate that we were in that situation,” McPherson told Speedcafe.com.

“But the car wasn’t good enough going into the session.

“We had to make a change which put us out at the back of the pack and when you’re behind a lot of cars the chances of someone making a mistake and causing a yellow flag goes up.

“Whether we crashed or not it probably wasn’t going to be our fastest time with a spun car at the last corner,” he continued, referring to James Moffat’s own crash just around the corner.

“It was disappointing as always to have damage but we got it fixed and just tried to do our best in Q2 (qualifying for Race 35), did a banker and got another yellow flag, and it is what it is.”

Nevertheless, McPherson believes that Lowndes has the potential to salvage an acceptable result if circumstances fall his way.

“I think we’ve got a car that’s capable of doing lap times in the top five so we just need to try and have clean air in front and see where that gets us to,” he said.

The Drivers’ Championship could realistically be over by the day’s end, and theoretically as soon as the conclusion of Race 34, though McPherson claims that the crew’s focus is on the Teams’ Championship, for which Lowndes must make a contribution.

“Our focus is the Teams’ Championship,” added McPherson.

“We can’t afford any mistakes, we’ve just got to try and get both cars in front of the two PRA cars and try and make sure we’re in garage #1 next year.”