Dumbrell on DVS pole as Waters comes to grief 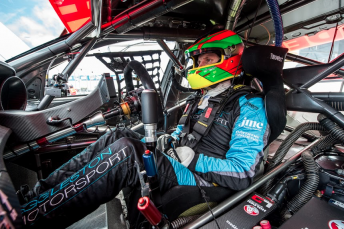 Paul Dumbrell has taken pole for the opening Dunlop Series race at Sydney Olympic Park while Cameron Waters will start 12th after a mistake saw the series leader bring out the red flags.

Dumbrell topped the field for the duration of the twice interrupted 20-minute, all-in qualifying session and while his first flyer was set to be enough to take pole, the Eggleston Motorsport driver made sure by laying down the only 1:29s lap of the session after the chequered flag.

Dumbrell’s session wasn’t without incident, however, when he backed his Wilson MedicOne Commodore into the Turn 2/3/4 tyre wall on his second lap.

Waters’ error, on the other hand, was far more costly.

Sitting third with a handful of minutes remaining, the Prodrive Racing Australia driver carried too much speed into the Turn 6/7 complex, ran off, and dragged the tyre bundle back onto the circuit.

The sanctions – loss of best lap time and exclusion from the remainder of the session – dropped Waters to ninth before the Enzed-backed driver was relegated a further three positions as qualifying came to a close.

Jonathon Webb suffered a similar fate on his return to the Development Series, burying the #10 Image Racing Falcon in the wall just beyond the halfway mark, and will start this afternoon’s race from 18th.

Andrew Jones’ fastest lap stood up for a front row start despite the 2004 series winner sitting out much of the latter half of the session, while Garry Jacobson went third-fastest after the chequered flag.

Liam McAdam provided the biggest highlight when he leapt incredibly high onto two wheels at the Turn 2/3/4 chicane before coming to rest with a large impact with the tyre wall.

Race 1 will be held from 15:45 today, as Waters attempts to protect a 149-point lead with 300 available this weekend.