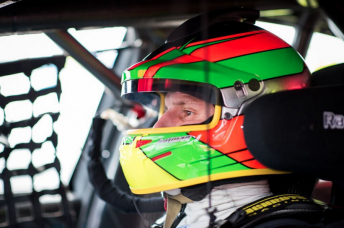 Paul Dumbrell has ensured that the Dunlop Series will go down to the final race as he won the opening heat at Sydney Olympic Park.

Series leader Cameron Waters finished eighth after an incident in qualifying, and thus sees his margin pegged back to 89 points with 150 going to the winner of tomorrow’s finale.

Dumbrell skipped out to a second-plus lead over Eggleston Motorsport teammate Garry Jacobcon by the end of the opening lap.

Andrew Jones fell from second on the grid to fifth, spectacularly smoking up the rears of his Commodore when his clutch slipped in the long hold at the start.

Dumbrell meanwhile doubled his lead on the second tour, before the field came under the control of the safety car due to the stricken Aaron McGill.

McGill, in an incident not captured by television, had sustained heavy rear damage at the Turn 2/3/4 chicane, and gesticulated at Liam McAdam as the field filed past under yellows.

With the safety car spending eight laps on track as recovery crews attended to the significant fluid spill, only one lap remained of the time certain encounter upon the restart.

Dumbrell ultimately beat Jacobson to the finish line by just under eight tenths of a second.

Todd Hazelwood took third position on the final lap, criss-crossing a defensive James Golding out of Turn 1, while Jack Le Brocq relieved Jones of fifth with a handful of corners to run.

Qualifying for Race 2 will be held from 9:55 tomorrow, ahead of the race proper to close the season at 14:20.