Sheldon Creed has taken out Race 1 in the Stadium Super Trucks at Sydney Olympic Park.

Greg Gartner led early but didn’t complete a lap before drama struck, hitting the twin main straight jumps at an awkward angle and launching into an ugly roll-over.

That left Matthew Brabham in the lead before he was quickly usurped by PJ Jones, who was in turn passed by Creed on Lap 4.

Robby Gordon was the main threat following the Lap 5 competition caution, divebombing Paul Morris and then wearing down Jones to take second, 1.5s adrift of Creed.

Gartner managed to complete all seven laps of the race despite his prang, unlike Matt Mingay and Scotty Steele.

The pair made heavy contact when Mingay struck the wall and bounced into Steele’s path on Lap 3. Ryal Harris takes his first pole of the year

The series leader did his prospects of a third V8 Utes title no harm by setting the two fastest qualifying laps midway through the 20 minute session.

George Miedecke, his nearest challenger for the title, kept up the pressure by joining his Matt Stone Racing teammate on the front row, logging a time two tenths shy of Harris’ benchmark 1:44.37s.

Kris Walton will head up the second row alongside Peters Motorsport stablemate Ryan Hansford after leading early, while Sieders Racing teammates Rhys McNally and David Sieders continue the theme on the third row.

Adam Marjoram, currently third in the series, will start Race 1 from ninth after a harmless off near the halfway mark. 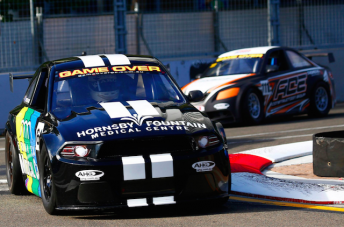 Peter Carr impressed in his return to the Aussie Racing Cars with a late blitz in qualifying.

The Sydney-based driver reeled off successive fastest laps to win the session by 0.24s over Trent Young and Adam Uebergang, the latter having twice topped the timesheets.

Craig Woods was ultimately fourth after his fastest time was stripped due to kerb hopping, ahead of Adrian Flack, Blake Sciberras, and series leader Brendon Pingel. The Dream Motorsport driver topped both sessions to finish over three tenths of a second clear of Jordan Lloyd on combined times, ahead of Frankie Maiolo, Harry Hayek and Luis Leeds.