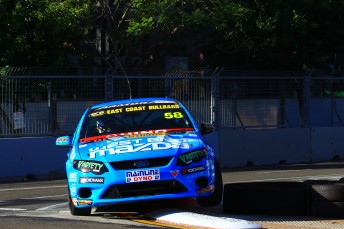 The series leader did his prospects of a third V8 Utes title no harm by setting the two fastest qualifying laps midway through the 20 minute session.

George Miedecke, his nearest challenger for the title, kept up the pressure by joining his Matt Stone Racing teammate on the front row, logging a time two tenths shy of Harris’ benchmark 1:44.37s.

Kris Walton will head up the second row alongside Peters Motorsport stablemate Ryan Hansford after leading early, while Sieders Racing teammates Rhys McNally and David Sieders continue the theme on the third row.

Adam Marjoram, currently third in the series, will start Race 1 from ninth after a harmless off near the halfway mark.