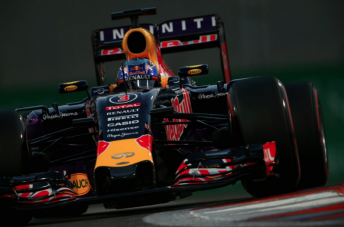 Red Bull has confirmed it will run TAG Heuer branded Renault engines for the 2016 Formula 1 season.

The Milton Keynes squad had been linked to running rebranded Renault power units after failing to secure an engine supply deal with Mercedes or Ferrari.

The arrangement is also confirmation of multi-year partnership between the former world champion team and the famous luxury Swiss watch brand, who sponsored rivals McLaren for 30 years.

From next season the engine naming rights deal will see the team’s challenger known as the Red Bull Racing-TAG Heuer RB12.

“TAG Heuer and Red Bull are two transcendent brands which have both a passion for racing and a drive to do things differently, and this unique collaboration is further evidence of that,” said Red Bull team boss Christian Horner.

“TAG Heuer has been an icon in the world of Formula One for many years and we’re delighted that they’ve chosen to continue their association with the sport by teaming up with us.

“Our shared values of innovation and a desire to stand out from the crowd make this one of the most exciting partnerships in F1.

“We are also pleased to see Renault confirm its long-term commitment to F1 and would like to thank them for their contribution to the team since 2007.

“Their technical partnership with Ilmor gives us confidence, and we look forward to the 2016 season.”