The damage to Winterbottom’s Ford. pic: Chris Stubbs via twitter

Championship leader Mark Winterbottom suffered a brief hit with the wall in an opening Coates Hire Sydney 500 practice session which was topped by Shane van Gisbergen.

The Prodrive driver locked the rear wheels of his Falcon in the second half of the 30 minute hit out which saw him slide into the barriers at Turn 1.

Winterbottom was able to recover the car to the pits where it remained for the rest of the session as his crew fixed cosmetic damage.

“Practice is for finding the limits. I turned in and she went. It wasn’t a big hit. The track is pretty slippery,” said Winterbottom.

Frosty had enjoyed a spell at the top of the timesheets earlier in the session, but it was van Gisbergen who emerged quickest with the Tekno driver posting a 1:28.6s effort around Sydney Olympic Park. 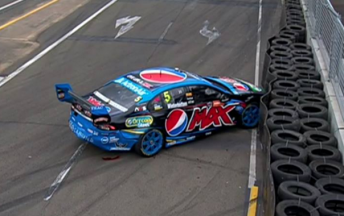 Scott Pye maintained his impressive form to slot into second spot in the DJR Team Penske entry albeit 0.4s adrift of van Gisbergen.

Red Bull’s Jamie Whincup was another driver to enjoy the top spot briefly before he ended practice in sixth.

James Courtney, Michael Caruso, James Moffat and Winterbottom, who ended the session in the garage, completed the top 10.

Tim Blanchard was involved in the only other notable incident when his LDM entry made contact with the wall on the back straight.

Previous Story Extra caution at Prodrive ahead of decider