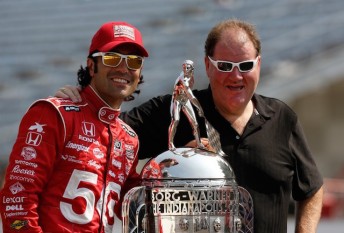 Retired IndyCar star Dario Franchitti has welcomed the shock Australian entry which will see Matthew Brabham continue a family dynasty in the Indianapolis 500 next year.

Franchitti was quick to offer his support for the KV Racing Technology fielded Pirtek Team Murray entry that will see Matthew Brabham become the third third generation racer to tackle the 200-lap classic at the Brickyard.

The accomplished Franchitti is a close associate of eponymous team creator Brett Murray who has been a regular Indy 500 attendee for more than two decades.

“The 100th running of the Indy 500 is going to produce so many highlights and the concept of having Matt (Brabham) driving his rookie event in a car carrying the spirit of his grandfather Sir Jack is fairytale stuff,” said Franchitti.

Franchitti is a noted student of motor racing history and is delighted the Brabham name will continue at America’s grand cathedral of speed.

“‘Crusher’ has been a mate of mine for many years and I know it has been a dream to enter his own team in the Indy 500 and, with the help of Pirtek and others, he is going to make that a reality in the 100th year,” Franchitti said.

“It will be cool to see a third generation of the Brabham family on the grid.

“Knowing the passion of the Aussies, I am sure Matt will be out there with the support of a whole nation behind him.

“The Indianapolis 500 will be a little different for all of us next year. I think we have some exciting times ahead.

“The Indianapolis Motor Speedway is where dreams can come true, I know.”

A four-time IndyCar champion and three-time Indy 500 winner, Franchitti retired from driving after an accident in the final round of the 2013 championship at Houston, Texas however he remains a part of the Target Chip Ganassi racing organisation in an advisory role.

In 2012, Murray celebrated Franchitti’s victory at the traditional photo shoot with the Borg Warner trophy on the famous yard of bricks the day after the event.

Both were sporting white-rimmed sunglasses in a tribute to fallen 2011 winner Dan Wheldon who made the accessory famous during his career.

“I am very proud to call Dario a close friend and to have been welcomed as part of the Franchitti family over the years,” Murray said.

“Dario was one of the first on the phone when we were finally in a position to make an announcement and he genuinely could not be happier that we are going to the race, or for the fact that a young driver like Matt will get his chance to make his Indy 500 debut.

“We have had some fantastic fun together over the years and a few tough and sad times – this business gives you plenty of both if you are around long enough.

“Each year a group of Dario’s life-long friends come to the 500 from Scotland and we all stay in the same hotel and laugh and carry-on for five days.”

Pirtek Team Murray will continue to roll-out announcements at the PRI (Performance Racing Industry) show in Indianapolis next week.

Next Story Q&A: Matthew Brabham on his Indy 500 dream