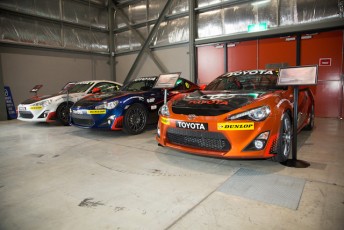 Toyota has revealed the calendar for its inaugural Australia one-make 86 Racing Series.

Coming on the back of the New Zealand version which was established two years ago, the Australian 86 Series will run across five rounds at selected V8 Supercars events next year.

As previously reported, a total of $50,000 cash will go to the series winner.

Marketing for the series will step-up tomorrow at Sydney Olympic Park when Steven Johnson, Aaron Seton and Leanne Tander each turn laps in 86 machines.

Johnson and Seton had been scheduled to demo two of the cars at Bathurst in October, but the run had to be cancelled following Chaz Mostert’s qualifying crash.

The coupes will run with a Neal Bates Motorsport designed roll cage which has been ratified by CAMS and meets common design and material specification.

The grid density at each round will accommodate a maximum of 32 cars, including up to five cars driven by professional drivers or other guests nominated by Toyota.

The category is being managed by Sydney-based AirTime Autosport which is fronted by respected commentator Neil Crompton.