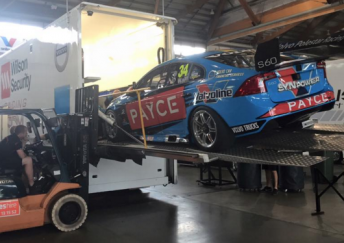 A forklift being used to help lower the car to the ground. pic via twitter

David Wall’s Volvo narrowly avoided a crash landing in the Coates Hire Sydney 500 paddock after a tailgate failure on the team’s transporter.

The #34 S60 lurched to one side when the tailgate’s screw jack mechanism malfunctioned while the car was being lowered from the top deck.

Uninjured, crew members subsequently utilised a forklift to carefully bring the tailgate and car to the ground.

While team-mate Scott McLaughlin quickly uploaded an image of the incident to social media, Wall was not yet at the circuit and remained initially unaware of the incident.

“A friend of mine called me and asked if everything was alright and I didn’t know what they were talking about,” Wall told Speedcafe.com. Wall’s Volvo balances on the troublesome tailgate. pic via twitter

“It just goes to show that at the end of the day the tailgate is a mechanical item and they can fail.

“I gave the car a pat as I walked past it on the way in, just to make sure it was ok.

“It’s made a bit of a longer afternoon for the boys setting up, but the main thing was that nobody got hurt.

“The way I look at it is we’ve got the bad luck out of the way, hopefully, so we can get on with the weekend.”

This weekend marks Wall’s last as a full-time driver in V8 Supercars, with his seat at Volvo to be taken by James Moffat next season.

Wall is the only Sydney-based V8 Supercars Championship driver and runs his own race car preparation firm, Wall Racing, from the New South Wales capital.