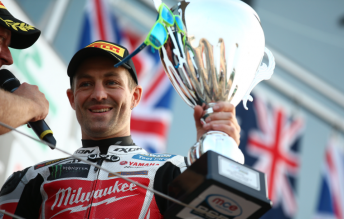 The 32-year-old from Sydney will graduate with the British-based Shaun Muir Racing operation that guided him to the British Superbike Championship crown this year.

The team has decided to step up to the World Superbike Championship switching from Yamaha to Milwaukee backed BMW S 1000 RR machines.

Brookes has clocked up 35 race starts in the World Superbike Championship during his career but is yet to complete a full season in the category.

The Australian’s best result of seventh came at Spain in 2007 with his last outing being a wildcard ride at Phillip Island in 2012.

The reigning British Superbike champion will be joined at the team by former MotoGP rider Karel Abraham.

“I’m excited to be back in world superbikes and to go there with the same team I won the British superbike title with is perfect,” said Brookes.

“I haven’t raced a BMW before, but the bike and factory are proven and I am certain it will be competitive.

“Everyone’s ambition was to move forward, and it was the same for our team manager to our mechanics and crew to me. We all had the attitude, that we wanted to reach for the next challenge.

“We looked at options from a number of manufacturers, but we felt for world superbikes BMW offered the best bike to cater for the current rules of world championship.”

The Milwaukee team is scheduled to complete a pre-season test in Spain early next year before heading to Phillip Island for the final test in February.