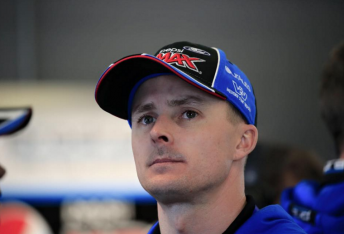 V8 Supercars Championship leader Mark Winterbottom travels to Sydney today to embark on the biggest weekend of his career.

Heading to the Coates Hire Sydney 500 with a 179 point advantage over Craig Lowndes, Winterbottom is on the cusp of his long awaited first V8 Supercars title.

Originally hailing from Western Sydney, the Melbourne-based driver has finished in the championship’s top five in each of his nine seasons since joining the now Prodrive branded team.

Often only an outside hope at the final event, Winterbottom has fallen short of the title on each occasion.

A dominant force for much of this season, pressure has built on Winterbottom and Prodrive as their charge has waned over the last three events in the face of stiff competition from Lowndes and Red Bull.

Lowndes had been a full 423 adrift of Winterbottom after September’s Sandown 500 and has clawed his way back into the picture despite losing 75 points with a tyre failure while leading at Pukekohe.

Bristling at suggestions that he was feeling the heat at Phillip Island two weeks ago, Winterbottom says he’ll be most relaxed when he finally returns to the car for Friday practice.

“I’m looking forward to the challenge,” said Winterbottom of the weekend ahead, where 300 points remain available over the three races.

“There’s pressure, there’s lots of things going on, but when you get in that car it’s all going to relax.

“I’m really looking forward to it. It’s hopefully going to be a good weekend, but there’s a lot at stake. It’s a massive weekend.”

It promises to be just as big a weekend for Prodrive, which has too ridden the highs and lows of V8 Supercars since its debut in 2003 without tasting ultimate success.

The teams’ championship equation is considerably tighter than Winterbottom’s, with just 72 points separating the Ford squad from Red Bull Racing Australia with 572 on the table in Sydney.

Team principal Tim Edwards, however, is clear that Winterbottom’s quest for the coveted drivers’ championship is the priority.

“We’d love to win the teams’ championship as well but first and foremost it’s got to come down to the drivers’ championship,” he said.

“That’s got to be our number one priority. If we can get the teams’ championship as well that’d be fantastic, but it’d just be icing on the cake.”

Edwards says the team has meticulously prepared for the event and will err on the side of caution in the races if required.

“I think it’d be pretty brave of us if we took a ‘win it or bin it’ approach because we just can’t afford to have a DNF,” he said.

“Of course we want to win it. In a perfect world we’ll wrap the championship up on Saturday and then have some fun on Sunday and go for the race win.”

Winterbottom meanwhile says he’s looking forward to the calming influence of the typically laidback Steve Owen in the garage this weekend.

Owen, who co-drove with Winterbottom in the Pirtek Enduro Cup, steps into Chaz Mostert’s #6 Ford while Waters focusses on his Dunlop Series efforts.

“I think he’s the right guy for the job in this final round,” said Winterbottom.

“Relaxed is Steve Owen all over, but when he’s in the car he can turn it on.

“I’m looking forward to seeing him out of the second driver role, stepping up and qualifying on new tyres.

“When he needs to do it I think he can do it. It’ll be good to watch.”

VIDEO: Winterbottom and Edwards on Sydney 500