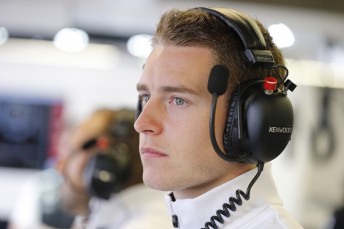 McLaren ended its difficult 2015 campaign on a positive note by topping the times in the Pirelli tyre test at Abu Dhabi.

The time proved to be 0.3s faster than Ferrari’s Kimi Raikkonen, who was among a group of nine drivers in action from the 2015 grid.

Teams were not permitted to try any new parts on their cars with the test solely devoted to tyre development.

Pirelli distributed several prototypes of its new ultra-soft compound tyres to be introduced next season as the Italian manufacturer bids to spice up the tyre strategies for 2016.

“We had one shot when it came to testing tyres for next season, and we can be satisfied by what we’ve achieved in this test, even if we have to fully analyse the data,” said Pirelli Motorsport’s Paul Hembery.

“We’ve tested different versions of the new ultra-soft compound for 2016, which was one of the targets for this session.

“The ultra-soft’s target for 2016 is to introduce a compound softer than the super-soft and mainly designed as aggressive choice for street circuits, with better performance than the latest version of the super-soft tyre and faster degradation, in order to allow the teams to take a more aggressive approach to race strategy.

“Whether this will produce more pit stops, or any difference in strategies, it’s too early to say for now.

“But it seems we are heading in the right direction: the ultra-soft is expected to offer more possibilities for certain races.”

Sauber’s Marcus Ericsson emerged as the best of the rest in third ahead of Lotus’ new signing Jolyon Palmer.