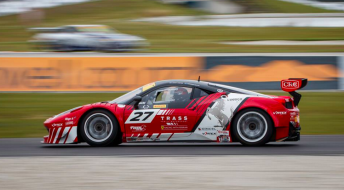 Auckland driver Jono Lester has confirmed he has parted ways with the Trass Family Ferrari team.

Lester was the designated #1 driver in the 458 Italia GT3 machine, quickly becoming one of the fastest drivers in the Australian GT Championship with four pole positions from six rounds.

It is unclear of Lester’s immediate plans although it is known that he is exploring opportunities both in Australasia and internationally.

“This email is to inform you that I have resigned from Trass Family Motorsport effective immediately, in both a professional driving and a marketing capacity,” read a statement from Lester.

The team was run by Lester’s father Richard who oversaw a small but experienced squad for owner lotto millionaire Gerald Trass which moved under the umbrella of Maranello Motorsport after the Bathurst 12 Hour earlier this year.

“I have enjoyed the last 18 months, with the successes and the challenges they have presented.

“I am now working towards a competitive package for 2016 and will announce any plans at the appropriate time.”