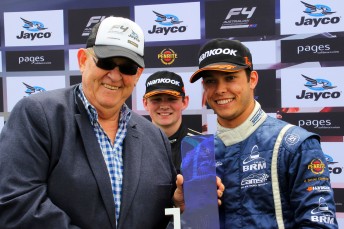 Newly crowned CAMS Jayco Formula 4 champion Jordan Lloyd is assessing his options as he looks to make the next step in his career.

The Queenslander wrapped up the inaugural Formula 4 title at Phillip Island by completing a clean sweep of race wins and with a round to spare.

Lloyd is set to receive $150,000 from CAMS which will be allocated to help progress his career next year.

The 19-year-old has also qualified for a two-day F3 test with the renowned Carlin outfit at Spain’s Catalunya circuit.

Despite wrapping up the championship before this weekend’s Sydney Olympic Park finale, Lloyd says his season is far from over as the Toowoomba driver is busily preparing for the next chapter of his career.

Lloyd is assessing both national and international options for 2016.

“It is always a good thing being the inaugural winner of a new championship,” Lloyd told Speedcafe.com.

“The prize money at the end of this year is obviously quite a large sum of money it is one of the largest sums of money we have ever had especially from a third party. All the doors are a little bit more open to be able to choose the next class we want to go into.

“It is a good amount of money CAMS has put in but there is still a lot more to find if we want to push towards Europe.

“We don’t really know exactly where we will be at this stage.

“Overseas would be good, the whole point of F4 is to get drivers to make a career out of the sport.

“Being able to wrap it up a round before the end of the season is a breath of fresh air it has given me extra time to focus finishing the right people to talk to help push my career further.”

The field for the final round of the championship will see the grid expand to 12 cars with the return of Western Australian Nick Rowe and the addition of New South Wales state Formula 3 Series winner Nick Filipetto.