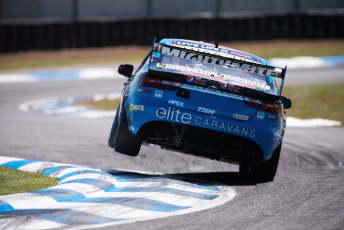 Prodrive is among teams keen for a twin-spring ban

Opinion remains split over the freedom to use twin-spring dampers in V8 Supercars following a recent summit on cost containment.

All team owners met in Melbourne ahead of the recent Phillip Island Super Sprint to share ideas on how to stem rising costs.

The wide-ranging discussion varied from technical matters through to further reducing staff permitted at race tracks and a call for a driver salary cap.

The technical proposals included a move to ban twin-spring dampers, which have been a repeated point of contention in recent years.

The twin-springs are seen by some as an unnecessarily complex part of the current technical package, requiring extra resource to understand and maintain.

Although rear twin-springs have been common since late last decade, they are now used front and rear by leading squads such as Prodrive and Triple Eight.

Having two coil-overs wrapped around one damper allows engineers to effectively run different spring rates for corner entry and exit.

Devising the right combination of rates and pre-loads, as well as the driver’s ability to feel the ‘transition’ between springs, make utilising the systems somewhat of an art form.

The twin-springs were banned from the Dunlop Series in 2012, but appear unlikely to disappear from the main series amid a division over their place in the category.

No technical changes were directly tabled from the team owners meeting, although several teams are undertaking further analysis on ideas discussed.

Any changes, however, are likely to be only minor, with continuing as much of the current technical package as possible largely seen as the most cost effective scenario.

Although the Gen2 concept will open the category up to non-V8 engines and two-door bodyshapes from 2017, the current chassis and control components will be adopted by any new vehicles.

Prodrive team principal Tim Edwards is a somewhat surprising advocate for implementing a twin-spring ban in the main series, as his team is thought to have one of the most well sorted suspension packages.

“We’ve been very successful with them, so we could be arguing for them to stay, but sometimes you have to take your team hat off and say what’s good for the sport,” Edwards told Speedcafe.com.

“We’ve got to keep drawing it back to ‘what do the fans want to see?’ They want good racing.

“It (the twin-spring) ends up costing a lot of money because you’ve got multiple spring configurations with different rates and different pre-loads that you apply to both of them. 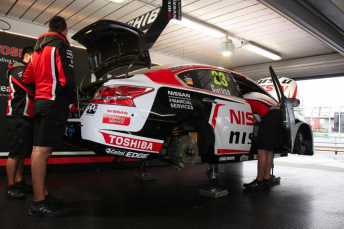 “You end up having so many dampers with all these configurations pre-assembled on them. A huge amount of labour goes into that.

“You could argue that we’ve all got them, so it doesn’t save any money, but you can’t ignore the labour that goes into the maintenance and understanding them.

“At the moment there is a majority of the pitlane that want to get rid of them and a minority don’t want to.”

Edwards meanwhile suggests that a mastery of the twin-springs played a role in driver Chaz Mostert’s blistering pace this season prior to his Bathurst accident.

“You’ve got that crack point between the two and it’s very hard to even see that in the data, so you are reliant on the driver,” he said.

“Chaz has a really good feel for that crack point and him and Adam (De Borre, engineer) have worked really well together being able to tune it.”

As a driver and team owner, Nissan Motorsport’s Todd Kelly sees both sides of the twin-spring argument.

Like Edwards, Kelly has the burden of fielding four cars in the championship amid a difficult sponsorship market.

“From a drivers’ side and an engineering side you always want things to play with,” Kelly told Speedcafe.com.

“But as a team owner when you look at how much money goes into running a team, I’d really question how much benefit it’s actually giving us having that many freedoms in the cars.

“Having more options means that some people get it right and wrong more, so it’s arguable that the racing might be a little bit mundane if everyone is running the same.

“But I’m really keen to look at anything that doesn’t add value to the business. These cars are bloody expensive to run and build. Really expensive.”