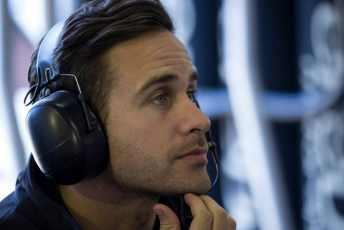 Ash Walsh will remain part of the Erebus Motorsport team at Sydney Olympic Park, despite being benched for the second consecutive event.

Citing a need to find a set-up direction with more experienced drivers, Erebus installed Dean Canto in its #4 Mercedes at Phillip Island before calling up Alex Davison for Sydney.

The moves have triggered widespread speculation that Walsh will not continue with the squad next year, despite being contracted.

Walsh however affirms that there has been no formal split between the parties and that he will attend Sydney with the team.

“I’ll be there to support the team in the same sort of capacity that I was at Phillip Island to learn from what’s going on,” Walsh told Speedcafe.com.

“It was hard for me at Phillip Island obviously because I want to be in the car, but having another driver’s perspective certainly taught us a few things.

“Right now I just have to sit back, do what the team asks and support them. That’ll continue in Sydney.”

Walsh’s options appear limited if he is cut loose by Erebus, with the #3 Holden at Lucas Dumbrell Motorsport the only available seat following confirmation of Brad Jones Racing’s full line-up.

Those still in the driver market include Kiwi Andre Heimgartner, who like fellow rookie Walsh was sidelined from his full-time drive ahead of Phillip Island.

While Chris Pither has already been confirmed as Heimgartner’s full-time replacement at Super Black, Walsh says he’s yet to directly discuss 2016 with Erebus.

“At the moment the decisions have been made round-to-round putting Dean and then Alex in the car,” said Walsh.

“There’s been no chat about 2016 being different to the plan.”

Erebus has signed David Reynolds for next season to replace current lead driver Will Davison, who will depart for Tekno Autosports.

He was 25th in the standings before Phillip Island, scoring a single top 10 finish at the opening event of the year in Adelaide.