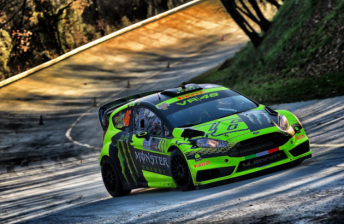 Valentino Rossi on his way to victory

The nine-time world champion on two wheels swapped his MotoGP Yamaha for a Monster Energy backed Ford Fiesta WRC for the traditional end of season event at the famous Italian circuit.

The 36-year-old held a comfortable 33.6s lead heading into the final day which he successfully extended to more than 50 seconds after taking victory on the final stage.

Rossi and co-driver Carlo Cassina had previously won in 2006, 2007 and 2012 with their 2015 victory equalling Capello Rinaldo in the all time winners list.

Hyundai WRC star Thierry Neuville produced a late charge winning the penultimate stage, but was too far adrift of the Italian to challenge for outright victory.

The Belgian finished 12.6s ahead of Italian Davide Brivio, who claimed third behind the wheel of a Ford Fiesta WRC.