Rosberg ends season on a high in Abu Dhabi 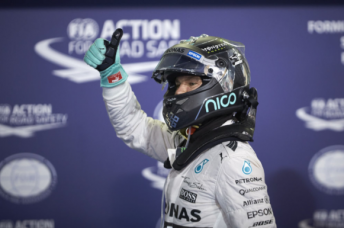 Nico Rosberg wrapped up the season in style by beating team-mate Lewis Hamilton to score his sixth victory of the campaign.

The Mercedes driver made the most of his pole position to dominate the early proceedings as world champion Hamilton struggled to match his opposite number’s pace.

Hamilton rolled the dice with a longer second stint but the Brit was unable to make the most of fresher soft tyres in the final laps to apply significant pressure on Rosberg.

In the end, Rosberg went on to record a comfortable victory with an 8.2s margin over Hamilton, while Ferrari’s Kimi Raikkonen enjoyed a solid drive to third.

Rosberg’s triumph was his third consecutive win and the first time the German has achieved the feat in his F1 career.

The sister Ferrari of Sebastian Vettel produced arguably the drive of the day by scything his way from 15th on the grid to fourth.

A long first stint saw the four-time world champion rise to second before fighting back from sixth to fourth in the final 15 laps following his second stop.

Force India’s Sergio Perez impressed throughout to score fifth ahead of Red Bull’s Daniel Ricciardo, who was locked in a race long battle with the Mexican driver.

The Australian’s sixth place finish was not enough to overhaul his team-mate Daniil Kvyat in the championship standings with Ricciardo finishing three points adrift in eighth.

Lotus’ Romain Grosjean fought from the back row of the grid after a gearbox change penalty to finish ninth on his final drive for the Enstone team.

Valtteri Bottas came home in 14th position after his race was hampered by an unsafe pit release that saw the Williams driver clip the rear of Button, who was entering his pit bay.

Initial contact with Sauber’s Felipe Nasr saw Alonso tag the rear of Maldonado, breaking the rear suspension on the Lotus. The Spaniard was penalised for the incident.