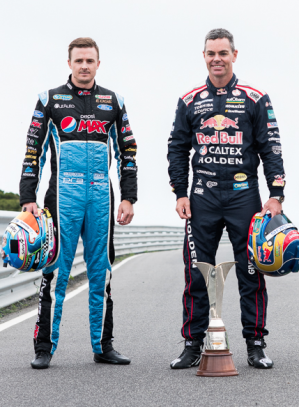 The V8 Supercars Championship battle is down to two protagonists ahead of this weekend’s Coates Hire Sydney 500 season finale.

Mark Winterbottom heads to Sydney with a healthy 179 point lead over rival Craig Lowndes, with just 300 left on the table across the weekend’s three races.

Even if Lowndes takes a clean sweep, the Ford driver need finish just 14th or better in each race in order to secure a maiden title for himself and Prodrive.

While the equation appears grim for Lowndes, the Sydney Olympic Park street circuit is renowned for shock results due to its punishing nature.

Winterbottom has failed to finish three races at the venue since its debut in 2009 and was well down in two of the three races last year after finding the wall.

Lowndes’ Red Bull team has meanwhile been the form outfit of recent months, allowing the three-time champion to whittle away Winterbottom’s advantage ahead of the finale.

Will Winterbottom hang on or will Lowndes steal it at the final hurdle? Vote below on this week’s Pirtek Poll.

Next Story VIDEO: Lowndes ready to fight in Sydney

Previous Story Perkins to sub for Percat at Sydney 500