Perkins to sub for Percat at Sydney 500

Perkins to sub for Percat at Sydney 500 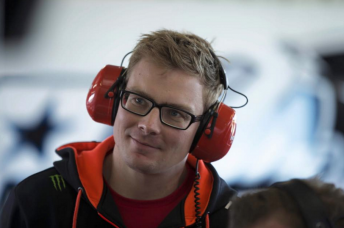 Percat will remain on the sidelines for the Coates Hire Sydney 500 as he continues to recover from an infection that took hold following a burn on his foot during the Castrol Gold Coast 600.

Having raced through severe pain from the initial injury at Pukekohe, Percat attempted to continue duties at Phillip Island, but withdrew on the Saturday morning after collapsing at the circuit.

The 27-year-old spent the subsequent three nights in hospital before returning to his home in Melbourne where he has continued to rest.

Paul Dumbrell took over from Percat at Phillip Island but will concentrate on his Dunlop Series duties with Eggleston Motorsport this weekend.

The LDM drive continues a series of substitute opportunities for Perkins, who was the lead driver in the Holden Racing Team’s #22 entry for three events due to James Courtney’s freak accident.

Although a long-time friend of Lucas Dumbrell and one of several drivers linked to the team ahead of its inaugural season in 2010, Perkins is yet to drive for LDM.

Perkins says he was working on his family farm in rural Victoria when he received the call-up from Percat.

“It was a bit like Days of Thunder,” he said.

“I was sitting on the tractor up at the farm mid-harvest and I got the call from Nick to ask if I would drive.

“We’ve been busy with barley and wheat on the farm this year, so I’ve been there three weeks and when I got the phone call I got on the UHF radio to Dad and told him I’d be going to Sydney instead of finishing the harvest.

“I’m really happy to help out Lucas Dumbrell Motorsport, and thanks to the Holden Racing Team and Holden for giving me a chance to jump in another Commodore.

“I’m just looking forward to doing a good job and getting some solid results at Homebush.”

The 29-year-old is expected to return to the HRT for next year’s Pirtek Enduro Cup alongside star driver Courtney.

Percat meanwhile will attend Sydney to support Perkins and the team.

“I hate missing another race, but I am feeling pretty average and couldn’t give the 100 per cent required so there’s little point in trying to race,” he said.

“I need to fully recover, so I am happy for Jack to fill in for me this weekend. He’s going to do a great job, while I’ll turn my focus towards 2016.”