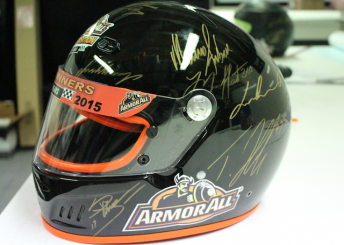 Fans are in the running to win a helmet signed by Armor All pole position winners for the last 11 seasons.

To be given away in a competition put on jointly by Armor All, Speedcafe.com and Network Ten, the helmet will be up for grabs at the V8 Supercars season finale during the Coates Hire Sydney 500 next weekend.

The only signature missing from the helmet is that of Jason Richards, who lost a battle with cancer in 2011.

Instead the popular Kiwi will be represented on the helmet with one of his famous JR Stars logos.

Fans can simply register for the competition by clicking this link.

They will then be asked to select who they think will win the Armor All Pole position for the 36th and final race of the V8 Supercars season.

As the last driver crosses the line a winner will be selected from all the entries.

That person will be made known to the last Armor All Pole winner of the season and the helmet will be personally signed on the visor during the cheque presentation an announced live on air.

Paul Blair, Armored AutoGroup senior vice president and managing director for Australia and New Zealand, said it was important to give something back to the fans.

“The fans of V8 Supercars have been fantastically loyal to the Armor All brand since the development of the Pole Award more than 10 years ago and we wanted to do something special in return,” said Blair.

“We have seen some pretty amazing Armor All Pole Award battles over more than 10 years of competition and I am sure it will be no different this weekend.

“To have all those signatures in one place is unique and creates a piece of history I am sure will increase enormously in value over the years.”

The helmets have been prepared by Matthew Gooley from MG Airbrushing on the Gold Coast.

“It was a pretty cool project to be involved in,” said Gooley.

“It was pretty amazing to have the signatures of so many great champions on one helmet.

“The end product will look pretty cool as part of someone’s collection.”

Fans can enter as many times as they like between now and 1pm EDST on Sunday, December 6.

The Sunday Sydney pole winner will sign a personal message to the competition winner.

Signatures on the helmet are from:

Next Story Slade's Supercheap Auto Performer of the Month