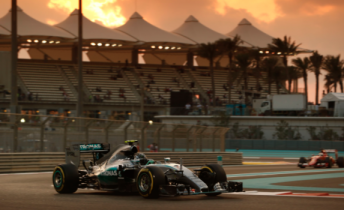 Nico Rosberg continued his impressive qualifying form by claiming a sixth consecutive pole position for the final round at Abu Dhabi.

The session provided an intriguing battle between the Mercedes team-mates with Rosberg and Lewis Hamilton enjoying spells at the top of the timesheets in Q3.

However, it was Rosberg who took the spoils with the German’s final lap eclipsing Hamilton’s best by 0.3 seconds.

Ferrari’s Kimi Raikkonen emerged in third spot in a mixed session for the Maranello team as Sebastian Vettel was knocked out in Q1 after an uncharacteristic error.

The four-time world champion admitted it was his mistake rather than a mechanical issue that saw him end the session in a lowly 16th position.

Daniel Ricciardo produced one of his best qualifying performances of the season to claim fifth for Red Bull ahead of the Williams of Valtteri Bottas.

Toro Rosso’s Max Verstappen will start from 11th after being pipped to the final spot in Q3 by team-mate Sainz.

McLaren’s Jenson Button was 12th fastest while team-mate Fernando Alonso suffered a left rear puncture in Q1 which restricted him to 17th spot.

Pastor Maldonado will start from 13th on the grid alongside Sauber’s Felipe Nasr with Romain Grosjean in 15th. The latter came to a halt on circuit in Q2 with a suspected hydraulic failure.