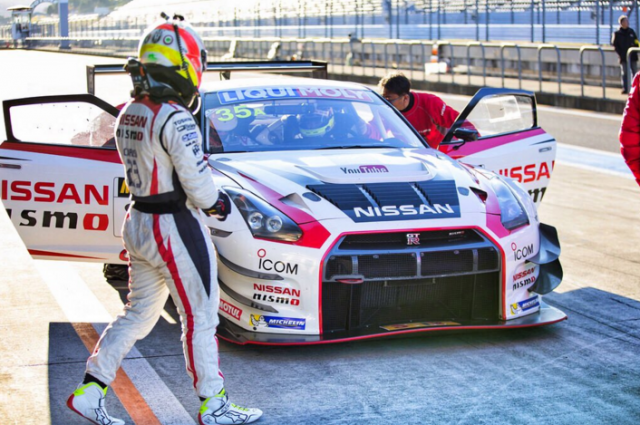 Caruso ready to climb aboard the GT-R

The 32-year-old is in Japan as a guest of Nissan, touring the company’s global headquarters in Yokohama before attending today’s NISMO Festival at the Fuji circuit.

Running annually since 1997, the festival celebrates the company’s past and present involvement in motorsport.

Caruso cut laps on Saturday in the GT-R GT3 that won February’s Bathurst 12 Hour in the hands of Katsumasa Chiyo, Florian Strauss and Wolfgang Reip.

Chiyo was on hand to give Caruso advice before the drive, which proved somewhat of a culture shock for a driver that has spent the last 10 years in V8 Supercars.

“The biggest challenge with the left-hand-drive car is picking the apex,” said Caruso after the drive.

“Sitting on the left-hand-side of the car, particularly in a GT car that I’d never driven before and at a circuit I’d never raced at either, it was a bit hard to learn the track and pick those apexes.

“But after a couple of laps I got a handle on it and started to push really hard.”

A big part of the learning process was also getting used to the car’s aero, which is significantly more advanced than that allowed in V8 Supercars.

“It’s so much more rewarding in high-speed corners,” he said.

“It really sticks to the ground and you can get right into it, which is pretty fun.

“The brakes are pretty good as well, it’s got ABS so you can get nice and deep into the corners without locking up.

“Obviously the twin-turbo that the GT has compared to the V8 Supercar, the powerband is a little bit different and it’s something you’ve got to get used to.”

While Nissan’s plans for next year’s Bathurst 12 Hour are yet to be confirmed, Caruso appears in the box seat to score his first drive in the event.

V8 Supercars team-mate Rick Kelly drove with the NISMO squad in the 2014 race, before the test day clash prevented any V8 Supercars drivers from competing this year.

“It’s something I hope I can tackle a bit more of,” smiled Caruso after his experience.

Next Story Rosberg ends season on a high in Abu Dhabi