Alonso refuses to rule out 2016 sabbatical 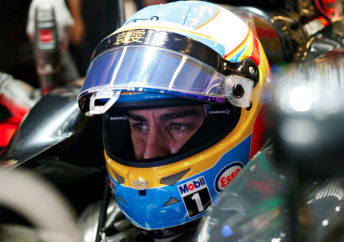 Fernando Alonso has refused to rule out taking a sabbatical next year if McLaren is unable to show signs of improvement in pre-season testing.

The double world champion has been vocal about his frustrations driving the uncompetitive McLaren-Honda, which has struggled for outright pace and reliability.

Alonso’s feelings were made abundantly clear at the Japanese Grand Prix when he openly criticised Honda’s engine describing the power unit as a “GP2 engine”.

Speculation over his future at the team followed with talk of Alonso taking a sabbatical rearing its head at this weekend’s Abu Dhabi Grand Prix.

McLaren boss Ron Dennis told media on Saturday that he is open to the idea of Alonso sitting out next season, before returning to see out the remaining two years of his contract at the Woking squad.

Such a move would free up a significant portion of budget for the team to use on development next year.

Alonso however says his plan is to remain with the team next season although the Spaniard refused to deny that talks of a sabbatical had taken place.

“You can never say 100 percent anything,” said Alonso when asked about taking a sabbatical.

“I’ve discussed many ideas, crazy ideas, but not at this point of the year. We are progressing well.

“That’s not the plan (to take a year off). The plan is to work very hard.

“So definitely my intention and my aim is to race next year and to win next year – or at least to be competitive. So that’s the plan.

“I have a contract for the next two years and my intention is to race.

“It is too easy to go to one (pre-season) test and (think you) know how competitive (you are) and how the season will go. That is impossible.

“In the first test, if we are second or if we are ninth it will not change my approach or my intention to keep winning that season. It is only one test.”

Next Story Rosberg ends season on a high in Abu Dhabi