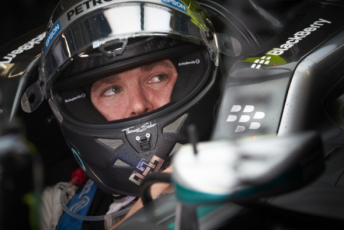 Nico Rosberg pipped Mercedes team-mate Lewis Hamilton to top the times in Friday practice for this weekend’s final round at Abu Dhabi.

After securing back-to-back victories in Mexico and Brazil, Rosberg once again had the edge over Hamilton, recording the day’s fastest time in the second 90 minute session.

The two Mercedes drivers proved to be the pace setters with Hamilton enjoying a spell at the top of the time sheets before Rosberg posted a 1:41.983s on the super soft tyres.

Rosberg was the only driver to clock a time under the 1:42s barrier with his effort 0.138s quicker than Hamilton, who topped opening practice.

Force India’s Sergio Perez emerged as the best of the rest in third despite ending the session prematurely with a brake issue.

The session provided encouraging results for Alonso with the McLaren driver only 0.9s shy of Rosberg’s benchmark.

However, his team-mate Jenson Button was unable to replicate the pace with the Brit a further second adrift of Alonso in 16th spot.

The Williams duo of Valtteri Bottas and Felipe Massa occupied 11th and 12th followed by the Toro Rosso pair of Max Verstappen and Carlos Sainz.