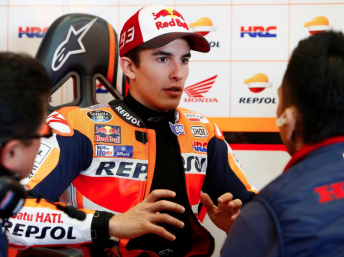 Marc Marquez escaped injury despite suffering a heavy fall during a Honda private test at Jerez.

The double world champion suffered two falls during the third a final day of the test at the Spanish circuit, one of which was a violent high-side that launched Marquez into the gravel trap at Turn 3.

Luckily the Honda rider escaped injury and was able to complete the test which saw the Japanese manufacturer continue to evaluate the new-for-2016 Michelin tyres.

“Today I had two crashes; one big high side in turn three, I entered the corner on the gas with consistent power but suddenly the rear wheel became very aggressive and it launched me, luckily I was ok,” said Marquez.

“The second one happened whilst I was doing an engine comparison as you must be on the limit to get the best feedback and the brake point with the Michelin tyres can sometimes be unpredictable.

“Anyway, we had a good three days and got a lot of information which we will now give to HRC, my feeling is that we have a little more potential with the new engine compared to the old one, but we’re still not at the level I’d like.

“I know Honda will work hard over the winter to improve everything for Sepang. I’d like to thank all the team for their hard work during the test and this year, now it’s time for some time off.”

Next Story Aussie Brookes steps up to World Superbikes