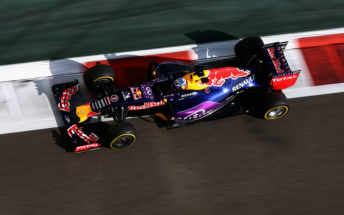 Red Bull has completed a deal with an engine supplier for next season according to team boss Christian Horner.

The Milton Keynes squad’s future had been hanging in the balance after failed attempts to strike a deal to source engines from Mercedes or Ferrari.

After terminating its agreement with existing supplier Renault, Red Bull has since reopened discussions with the French firm in a bid to run unbranded power units for 2016.

While this arrangement is yet to be confirmed, team boss Horner has revealed the squad has struck a deal with an engine supplier with the full details to be announced soon.

“Next year will be a transitional year,” said Horner.

“We have an agreement with an engine (supplier) for next year which hopefully will be confirmed in the coming days.

“It will have a development path, which ironically, in a way, is what we were trying to achieve 12 months ago, and we’ll see how that goes.”

Confirmation of the new alliance with Renault has been delayed while the manufacturer continues its ongoing discussions to take over the struggling Lotus F1 operation.

It is understood talks to buy out the Enstone squad have stalled as Renault tries to agree a commercial rights deal with Formula 1.

This has led to speculation that Renault could abandon their plans altogether, although its F1 managing director Cyril Abiteboul has hinted an announcement will be made next week.

“What I can say is that there will be no announcement regarding Renault’s future short term or middle term this weekend,” he said.

“But there will be an announcement very likely in the course of next week.

“We have always said that we would like to do it after the season, which ends on Sunday, and at the start of December, so that is what we will do. We will make an announcement then.”