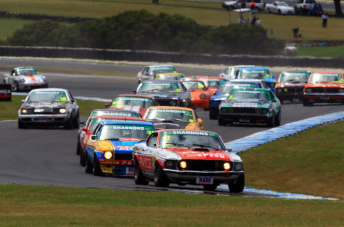 Touring Car Masters organisers have revealed a rejigged eight-round calendar for 2016, featuring a return to the Shannons Nationals.

Marking a return to the Nationals bill for the first time in four years, the TCM will feature at the Sandown (April) and Phillip Island (September) Shannons meetings.

The bulk of the calendar remains unchanged, with appearances alongside the V8 Supercars in Adelaide, Winton, Darwin, Ipswich and Bathurst.

All support races at V8 Supercars events will be shown on Fox Sports, while selected heats at Adelaide and Bathurst are also set to be broadcast on Network Ten.

The Shannons Nationals races will be live streamed and air on Speedweek, while the final round is also expected to receive post-produced highlights on 7mate.

Last weekend saw the TCM omitted from Fox Sport’s coverage after series organisers elected to save their television budget for 2016.

In a statement, TCM director Tony Hunter said racing with both the V8 Supercars and Shannons Nationals will expose the category to a wide audience.

“The 2016 Touring Car Masters calendar is a large change but it is one that we believe will open the shop front of the series up further,” he said.

“We are proud to be working closely with V8 Supercars to showcase Touring Car Masters at their events in 2016. We know we’ll put on a great show at those five rounds.

“We have worked closely with V8 Supercars to ensure a strong TV package at those rounds and with live racing on Fox Sports and Channel Ten across the season we have delivered just that.

“We are happy to be joining the Shannons Nationals for two rounds next year for events that offer an extremely high level of value for our competitors and great access for the fans.

“The TV and media package is strong at Shannons Nationals rounds, and we are also happy to be there to support our long-time TCM partner, Shannons Insurance.

“Ending the season at Muscle Car Masters on their new date will undoubtedly be a highlight.”