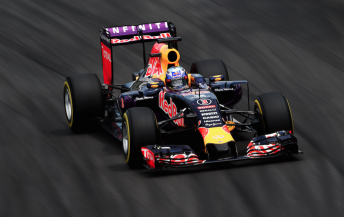 The Australian adopted a heavily upgraded power unit at the Brazilian Grand Prix which failed to deliver the improvements Renault had anticipated.

Red Bull has opted to use an older unit this weekend following the disappointing Interlagos results, which saw Ricciardo outpaced by his team-mate Daniil Kvyat, who was running the standard engine.

“At least it’s something we know,” said Ricciardo.

“Danii’s (Kvyat) weekend wasn’t so bad in Brazil and at least it’s even and there’s no ‘oh, he’s got this, he’s got that’. Put both of us in the car and neither of us can complain or have any excuses.”

Red Bull is still yet to confirm its engine plans for next season although an announcement was expected this week.

It is understood the operation is still in discussions with Renault to run unbranded power units next season.

While the engine situation remains unclear, Ricciardo is glad he will be on the grid despite not knowing how competitive his package will be in 2016.

“They are just saying they’re working on it and we will have something,” added Ricciardo.

“Obviously we’ve been in a bit of a compromised position the last two years, so it’s nothing new since I joined the team.”

Engines have been a hot topic leading into the Abu Dhabi Grand Prix with the Formula 1 Commission opting against pursuing a plan to introduce a budget engine in a bid to control costs.

The FIA asked for expressions of interest from potential manufacturers but has now decided to shelve the plans for the meantime.

Current engine manufacturers will now work with the FIA on a proposal which includes lowering engine costs, increasing the ease of supply and improving the noise.