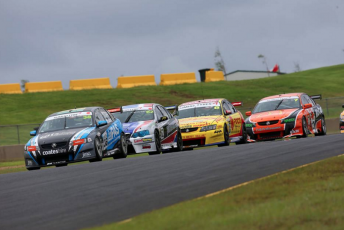 Having run exclusively with the Shannons Nationals since its inception in 2008, the third-tier class for ex-V8 Supercars is set to appear at the Winton (May) and Queensland Raceway (July) Super Sprints.

The move follows a non-points scoring event for the cars at last year’s Sydney 500, which was organised by a group of competitors independent of the category’s management.

Both Winton and Queensland Raceway have lost their Dunlop Series rounds for next year, allowing space for the Kumho class.

“We’re very happy that the Kumho Series will be joining us next year for the first time,” said V8 Supercars chief operating officer Shane Howard.

“Seeing a lot of those cars racing will bring back a lot of memories for the people in our pit lane who have previously driven and indeed built them, as well as the fans who have watched them over the years.”

Category manager Liam Curkpatrick says that linking with V8 Supercars events is a positive step in the class’ growth.

“We’ve had many fans keen to see our category compete at V8 Supercars Championship events for quite some time, so we’re thrilled to make that happen next year,” he said.

“Next year we have further change with the introduction of the VE/VE II Commodore and FG Falcon to the category, so the Kumho Series becomes even more important as part of the staircase of V8 racing in this country.”

The Kumho Series will again be contested over five rounds in 2016, with the dates and locations for the remaining three yet to be confirmed.

Stepping away from exclusively running with the Nationals comes as CAMS takes over the Shannons-backed series from former manager Rob Curkpatrick.