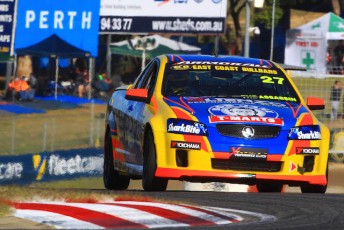 Kim Jane will celebrate a milestone at the final round of the East Coast Bullbars Australian V8 Ute Series when he notches his 350th start at Sydney Olympic Park from December 4-6.

Entering Utes after winning the NASCAR Championship, Jane has been a mainstay in the category since 2003.

The nephew of tyre king and former Bathurst winner Bob Jane, he is sitting sixth in the championship behind leader Ryal Harris.

“I’ve always seen the category with enormous potential, I’ve really enjoyed the series, I’ve made a lot of great friends and it’s a happy place to keep coming back to and race in,” Jane said.

“I can’t think of a series where you get more bang for your dollar and it’s so relevant to the Australian people.”

“Even though we’re a mathematical chance of the Championship performing well and getting most out of the car will be our main focus.

“It’s a shame about our performance at Bathurst, those two races that put us so far behind but we just have to keep bouncing back and get good results.

Jane’s best season results in the 12 years he has competed in Utes is third and second overall in 2007 and 2008 respectively.