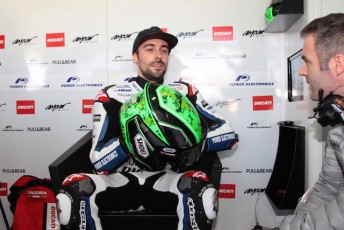 Irish rider Eugene Laverty has suffered a broken wrist while testing his Ducati at Jerez.

The incident occurred during a private three-day test for the Ducati team.

Laverty will undergo surgery on a broken left radius with the operation to be headed by Dr Xavier Mir in Barcelona.

The Aspar rider was coming to grips with the Ducati GP14.2’s new electronics and Michelin tyres before the crash ended his testing program.

Team-mate Yonny Hernandez completed the test schedule with the team.

“It’s a disappointing end to a good day of testing,” Laverty said.

“We made good progress with the new electronics and the last exit before I crashed was probably the first time we had the bike working correctly.

“The lap times were getting better and then I crashed, so I’m disappointed.

“It would always be nice to do another day but the positive thing is that the bike is working well, we are not too far away from the others and Yonny can continue to test tomorrow.”