Nissan readies for chassis focus in 2016 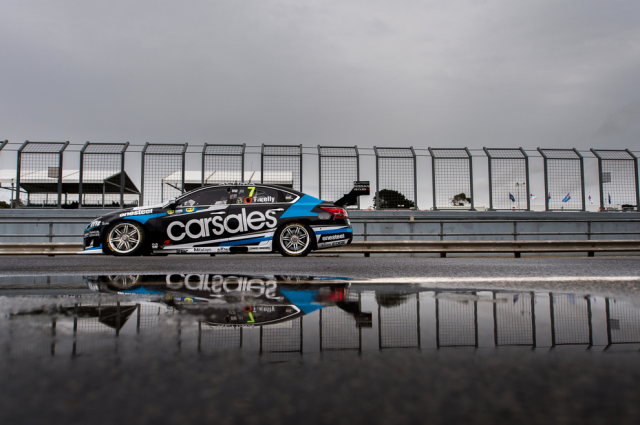 Buoyed by recent performance gains, Todd Kelly is assessing tweaks to Nissan Motorsport’s engineering structure to enable the team to take the next step in 2016.

Although the squad’s engine development currently remains a work in progress, the cylinder head upgrade introduced at Sandown marked a major turning point in the program.

Kelly is confident that the team will have optimised its package around the new design by the start of next season, taking what has been a major burden away from its engineering department.

The former Bathurst winning driver says that plans are already being put in place to adjust roles and workloads within the operation in order to maximise the resource for chassis development.

“We need to strengthen that side of the team and we’ve got two or three scenarios at the moment through which we can do that,” Kelly told Speedcafe.com.

“We’ve put a lot of resource into the engine since we changed to Nissan and now that we’re getting on top of it we really need to reallocate all of that.

“We’re looking at tweaking the structure to make sure that the chassis side is where it needs to be.

“We’re rapt with the people that we’ve got, but we’ll move a few responsibilities around.”

Despite a driver change in its fourth car, Nissan is expected to be one of the most stable teams over the break, maintaining the four-car model it has operated since Kelly Racing’s inception in 2009.

This off-season will also be the first since 2011/12 that the team does not have the added resource drain of designing and homologating a new aerodynamic package.

“The chassis has probably got all the ingredients there to be more competitive than what it is,” Kelly continued.

“We’re probably not arriving at the tracks with the car close enough to the window because of the resource that we’ve got allocated to that.

“It’s not a huge expense and crazy R&D (research and development) on the car, it’s just a matter of spending more time with it.

“It comes back to the fact that half of the engineering group that should be on the car are solely doing engine stuff.

“There’s been manifolds, exhaust systems, airboxes, all of that stuff falls back into the general engineering group which we won’t have to deal with next year.”

One element of the engineering structure that Kelly says has worked well this year is the addition of former Williams F1 man George Commins, who looks after Rick Kelly’s #15 entry.

Unusually for a modern V8 Supercars race engineer, Commins is not based at the race team and is instead domiciled in Queensland.

“He spends a fair bit of time at the race team but his role is quite specific and it doesn’t affect what he does,” explained Kelly.

“We’ve got no complaints at all about how that’s worked. If anything, given his role, it’s almost a bit refreshing having someone coming in and out and not getting stale with everyone.”

Kelly equalled his season best result of fifth in Sunday’s race at Phillip Island, leading home brother Rick at the end of the 200km.

Third driver Michael Caruso had been on course to lead home the two team co-owners before a clutch issue caused the Altima’s wheels to spin in its final pitstop.

Caruso had scored the team’s best result of the Pukekohe weekend earlier in the month with a sixth place, while Rick Kelly and co-driver David Russell stood on the podium at the Gold Coast.

As for next season’s goals, Todd Kelly is realistic on where the squad can hope to be in the highly competitive field.

“A lot of the races we’ve been to during this season, with where our equipment’s been at if you don’t do the best job you’re 18th to 22nd,” he said.

“We need our bad days to be 15th and our good days around the top five.

“When you’re in that window it’s a whole different ball game.

“We’re quite confident that our average will be a lot better next year.” Next Story Lowndes/Richards partnership to continue in 2016