Lowndes/Richards partnership to continue in 2016 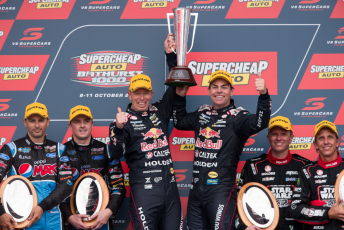 Richards and Lowndes will defend their Bathurst crown together next year

The duo won this year’s Bathurst 1000 in their second endurance campaign together since Richards defected from arch rivals Prodrive.

Paul Dumbrell has also been retained as Jamie Whincup’s co-driver, extending a partnership that has been in place since ‘PD’ stepped back from full-time driving at the end of 2011.

A co-driver for the team’s new recruit, Shane van Gisbergen, is yet to be announced, although Tekno owner Jonathon Webb is known to be a contender for the seat.

“Having both drivers back for the enduros next year is great for all involved,” said Triple Eight team manager Mark Dutton.

“PD and Richo are a part of the Triple Eight family, they are team players and are quick on the track.

“The enduro season is without doubt the busiest time of year, so to have drivers you can rely on and know always deliver 100 percent, it’s all you can ask for really.”

Lowndes and Richards finished fourth in this year’s Pirtek Enduro Cup, while Whincup and Dumbrell were 18th after a series of disasters.

Dumbrell made a one-off return to primary driving duties at Phillip Island last weekend, standing in for the unwell Nick Percat.

Although Percat is not yet confirmed to return for Sydney, Dumbrell has downplayed the prospect of a second drive, instead concentrating on his Dunlop Series commitments.